The last few days of our trip were to be spent mainly on the Spanish autoroutes, firstly the leg from Nimes to Barcelona (where we would spend 2 full days), then onto Andorra-la-Vella (lovely little tax haven in the Pyrenees) and finally the slog to Bilbao and home via the last ever sailing of P+O Ferries' Pride of Bilbao cruiseferry.
After a few hours and way too many beers/sangrias we decided to call it a night, and sent Kristian hunting for Kebabs (he went on a 40KM round trip in a taxi, and came back with four of the best kebabs we have ever had - mind you we were very drunk)

Next day we did the touristy thing - Gaudi, gaudi, gaudi, football stadium, gaudi......you get the picture. We got wind of a bar that did mojitos for €3.50 and that Goldfrapp were playing La Merce later that night (I LOVE GOLDFRAPP), so that was the plans for that day anyway.


Final day! The short drive to the port of Santurtzi, and the final sailing of the Pride of Bilbao, a cruise ferry that has been in service on the route since 1993. Due to consistent losses it's been cancelled. (apparently, although staff onboard seemed to disagree and quite a few suggested it was a very questionable/dodgy decision by P+O - putting several hundred staff out of jobs...payoff to Brittany Ferries maybe? They've just taken up the route afterall....ok I am rambling...)

Kind of a sad feeling after such an incredible trip. It's been expensive. I know I spent about £800 on the trip (not including the car!!!), but every penny was bloody worth it. It's been one of those experiences that I'll never forget, and one of the best times of my life. It was great to spend the rally with my Dad, chatting about things past and present, (the odd argument too), drinking and eating in foreign places never visited, experiencing cultures, meeting new people, and then the trip back with my best mates. Wouldn't change a thing.

Above all, using this opportunity to raise over £5,000 (including prize money) for the MND Association. What an experience.

I hope you enjoyed reading the blog entries, and I look forward to doing it all again next year! The 37 minute edited video is shown below (it is made up of three Youtube Parts so I've set up a playlist that you need to click - all three parts are there).

If you want a copy of the DVD, please mail me your name and address and I will send it when I get a chance (ta.maccollcopy@maccollmedia.com)

For now, thats all folks!

Alex+Calum+Kristian+Bob+Courteney+Alex
Posted by MacKing at 11:29 No comments:

We have made it to Bilbao....just.

Internet is rubbish in spain so will be 3-4 days delayed in our nimes-barcelona-andorra-bilbao-home postings.....

About 200km ago, while getting fuel, the car didn't start. The solenoid to the starter motor has packed up so we are having to bump start the car every time we need to start it.

That should be interesting tomorrow when we board the ferry and tuesday when we try and disembark in portsmouth......

More later....
Sent using BlackBerry® from Orange
Posted by MacKing at 10:44 No comments:

The Leg has made it to Barcelona

We got here yesterday.

Having a great time. Will post pics and vids tomorrow as we are going to be late for mojito happy hour at La Rosa bar (apparently!)

Off to the festival again tonight hoping to see Goldfrapp.

Having an incredible time.

1: The challenges are over
2: the distances especially days 6+7 are greater and there is less time.....

I dropped Dad off at Naples airport (real dump), but not before the car caught alight due to some spilt oil in boiling naples traffic (a worrying but amusing episode), and picked up Bob Moore who flew in (late) on the easyjet plane Dad was taking out.

We arrived at our lovely Mercure just outside Modena at about 7:00PM, and checked in (it wasn't really that great but it would do). We cooked ourselves Pasta in the room (well on the balcony) and enjoyed a few beers.

Nimes is a stunningly beautiful town nestled between Montpellier and Marseille in the south of France. It is home to the second oldest Colosseum in the world, which was featured in the film Ronin starring Robert De Niro. Most people recognise Nimes for its buildings but don't know where it is. 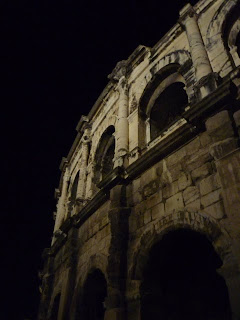 So - two long driving days, but a hell of a lot of ground covered:

Next few drives are short - 250 miles to barcelona, 150 miles to Andorra and 300 miles on the final leg to Bilbao. Really looking forward to sightseeing again in Barcelona but not so much the drive in the city........ Here is a short video of the last two days:

1: Ourselves! www.MacKing.co.uk + its customers have donated £250 to our cause.

2: Technovation, a UK based Conference Production company, donated £150 to our cause. Thanks Technovation! www.technovation.co.uk

4: Kerry @ Red Grape Records and Management (who happens to be married to Calum, no less) kindly donated £100! http://www.redgraperecords.co.uk/

5: Phill Brown, music producer extraordinaire has kindly donated £100. His book is out soon. Check out www.phillbrown.net

6: Denis @ Skye Mastering - ooh - another legendary music business name - has donated £250 to our cause! Thanks Skye Mastering! http://www.skyemastering.com/

7: WPS (Word Processing Services), a lovely family run printers just round the corner from our High Wycombe warehouse. They printed our posters and flyers free of charge. What lovely people! www.wordproc.co.uk

For more information on our charitable donations, please see http://www.justgiving.com/MacKing-UK-Does-Italy-In-A-Lancia.